More on the unprecedented and disastrous cuts to the World Food Program. Please help by donating $31 to our food drive. For $31 we can provide a package of food basics for a family that will last a month. 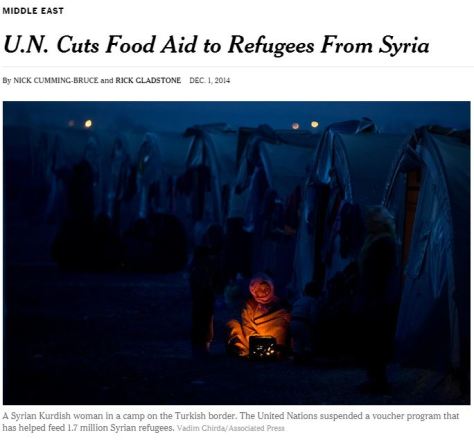 GENEVA — Facing what it described as a severe cash shortfall, the United Nations food aid organization said on Monday that it had been forced to suspend a voucher program that was helping to feed 1.7 million Syrian refugees in neighboring countries.

The suspension by the organization, the World Food Program, was one of the most drastic cutbacks ever by an emergency relief provider in the nearly four-year-old Syrian crisis, raising the prospect of widespread hunger at the onset of winter.

The cutback in aid will affect refugees in Egypt, Iraq, Jordan, Lebanon and Turkey who receive voucher cards from the program, which work like debit cards so users can buy food in local shops. The same mechanism also provides an economic lifeline to communities struggling to cope with the influx of Syrian refugees that has swelled since the conflict began in 2011.

This website uses cookies to improve your experience while you navigate through the website. Out of these cookies, the cookies that are categorized as necessary are stored on your browser as they are essential for the working of basic functionalities of the website. We also use third-party cookies that help us analyze and understand how you use this website. These cookies will be stored in your browser only with your consent. You also have the option to opt-out of these cookies. But opting out of some of these cookies may have an effect on your browsing experience.
Necessary Always Enabled
Necessary cookies are absolutely essential for the website to function properly. This category only includes cookies that ensures basic functionalities and security features of the website. These cookies do not store any personal information.
Non-necessary
Any cookies that may not be particularly necessary for the website to function and is used specifically to collect user personal data via analytics, ads, other embedded contents are termed as non-necessary cookies. It is mandatory to procure user consent prior to running these cookies on your website.
SAVE & ACCEPT